The looming UK General Election and the just-passed first anniversary of the death of Tony Benn give me a highly rationalised excuse to re-visit this.

In 2013 I helped out with shooting some behind-the-scenes timelapse video of the shooting of a promo for Two Tribes – The Miners’ Strike Musical (TT84). I was not present for the shoot but I have seen the promo and it’s very abstract.

I’ve seen the promo and I think it’s really good, but I got the impression that they were not happy with it. At the time of this blog post, I can’t find it online and the last tweet from their account was 14th March 2014 so I guess the project is on the back-burner at the moment.
http://www.tt84.co.uk/

Although included in the main edit, I said I would do a separate edit of the timelapse alone but really struggled to make anything of it. If you look at what was happening in the temporary studio you can see why. It doesn’t tell any kind of story that can be made sense of. Previously, I had sought permission to remix the track “Network” by DJ and musician Cy Tukay aka Cy Humphries and I thought the two things would go together as there was a strong socialist element to both.
http://www.residentadvisor.net/dj/cytukay

Here is his original:

In the end, though, I couldn’t make an edit of the timelapse work so I just used a single shot as a holder for the audio

I released the video on or just after the death of Tony Benn on 14th March 2014 and as of 17th March 2015 the video had accumulated a whopping global total of 26 views. 21 on Vimeo and a plump 5 on the more populous but less discerning YouTube.

Here is my remix on Vimeo and YouTube (please play both so that I can double my hits).

Not every musician can be Elvis Costello or Cy Tukay, and not every video editor can be Chris Cunningham or Bill Viola, but I can’t help feeling a little cheated that it was just ignored. I am particularly pleased with the way I shoe-horned a bit of Philip Glass’s “Satyagraha” in there, prompted by the way the Occupy movement had referenced it.
http://en.wikipedia.org/wiki/Satyagraha_%28opera%29

Strictly speaking, it’s not actually a remix because I just laid additional audio over the top of Cy’s track, and I am under no illusion that the strength lies in his original mix and the dialogue from the movie. However, coming to listen to it again (after figuratively burying it for a year), my additions sound a lot better than I remember.

I would say that, of course.

Cy never acknowledged it once it was published and I know what that means. It’s a polite way of saying he doesn’t like it, but at least he didn’t hate it enough to ask me to take it down. As I’ve said before, it’s great to be loved, but even being hated is better than being ignored.

I guess FONBAG is my bag, although I can ameliorate the disappointment with a few new acronyms that I will be using from now on.

Brand loyalty: Dan Sumption, one of my most regular customers.

To quote this advert for Disneyland Paris from the end of last year, “We all wish the magic of Christmas could start earlier”.

What they really mean is that they wish the income stream of Christmas could start earlier.

Anyway, I say if you can’t beat ‘em, join ‘em and here are a few photos of me, starting the magic of Christmas earlier at the Sheffield Zine Fest on 14th March. I was accompanied by my sister, Catherine, as a Christmas fairy (or Merchandising Operative) and my wife, Stella, as an Elf (or Fulfilment Centre Manager). 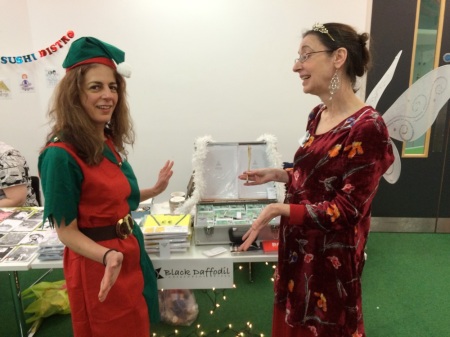 Some people were clearly non-plussed by the costumes and would not even make eye contact. However, I did get some customers who took it to the next level by revisiting their traumatised childhoods at the hands of shopping-centre Santas.

Stuart Faulkner and the crew from Footprints Co-Operative Print getting favours from Santa.

Please come along to the Sheffield Zine Fest 2015 at Electric Works, Sheffield, UK on 14th March 11am – 6pm and see me, amongst many others.