Just imagine how amazing my unique art will look in your beautiful home.

“Stained by Dead Inkjets” (excerpt) will be on show at Cupola Gallery until 28th June, and the main show at the Rutland Arms, Sheffield, UK will be rebooted on Wednesday 24th June with a fresh selection from the 33 collages, and extended until 9th July.

“Doorways With Wishes Scratched On Them” & “You Are Beautiful”

I have known Trish for many years and, although we only cross paths occasionally, she is one of the people who significantly contributed to my idea of a major retrospective at 50.

A few years ago, we met to discuss some potential ideas for her, at that time forthcoming, fiftieth year, My involvement would possibly be in terms of technical production elements.

We talked about life, the universe and everything and I really liked her plans to celebrate that year with events and artwork of her own. The year in question came and went, and I didn’t hear anything, and wondered what had happened. But then she popped up again, out of the blue, with her show “Cast”, currently at Cupola Contemporary Art gallery in Hillsborough, Sheffield, UK.
http://www.cupolagallery.com/exhibitions.php?ref=1302

Like Trish, I’ve worked for artists and creatives on many occasions and it is easy to let other people’s work overshadow your own. Although we don’t meet very often, I have always encouraged her to bring her work out of the closet, and now I am finally following my own advice. 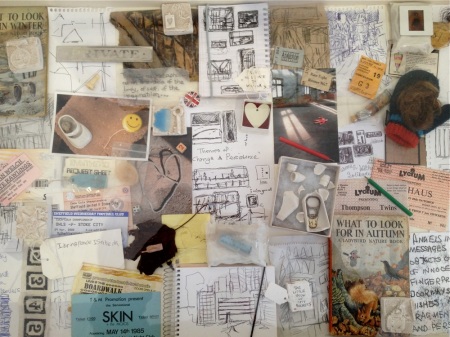 “Artist’s Collection (objects found, collected, made and given)”

Trish’s show is not a traditional retrospective as all the work was created in the last couple of years. However, it does look like the product of a much longer period, and there are a number of different themes present, and media employed. Also, much of the work references past experience and interpretations of her surroundings. For me, the stand out work is the assemblages of found objects, ephemera and photographs, but the show also includes drawings, etchings, paintings and cast objects. In one work there is a parade of progressively more successful attempts to cast an inappropriately small knife in porcelain. I particularly like the hopelessly ambitious nature of it and the ultimate, symbolic success after multiple failures.

The show continues until Sunday 10th March 2013 and I recommend seeing it. All the work is for sale and Cupola has an extensive display of other artists’ work for sale.

Cupola gallery is another Sheffield institution, founded in 1991 by Karen Sherwood, and is still going strong. Cupola is a commercial gallery with a number of spaces in converted commercial buildings. It is one of the few galleries I have visited that shows and sells work outdoors as well as in gallery spaces. 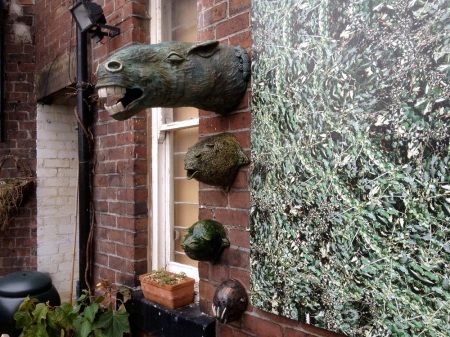 I also spotted some other friends’ artwork on sale there, including work by Andy Cropper, Paul Evans, Jen Booth and Lyn Hodnett.

And not forgetting Karen’s own work too, which doesn’t get much time to get shown.